Venom or Poison? Among the wildlife observations I was most excited about on my last trip to Shenandoah was spotting my very first Timber Rattlesnake.I probably got a bit closer than I should have but I had been reading just a few weeks before about how relatively docile they are.I knew that if I got a bit too close, the snake would more than likely communicate its concern via its rattle, which it never did.He certainly kept his eye on me, but I think we both knew who was boss in this encounter (clue: it wasn’t me). Today I came across a very interesting National Geographic article about the difference between Venom and Poison, with the takeaway being that Poison is passive and defensive (think toxic skin secretions or other neurotoxins designed to be delivered on ingestion).I immediately thought of my most recent encounter with a deadly venomous organism, which in all honesty is very unlikely to be deadly to a full-grown adult. When I first started learning about the Timber Rattlesnak…
Post a Comment
Read more 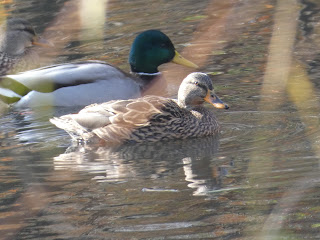 Among the species on this earth I'm most ambivalent about I would hold the Mallard as being pretty high on the list.

Among the cardinal sins the Mallard is guilty, are envy, wrath and lust.  This manifests itself as rape and violent forced reproduction.  A shame as well, because the Mallard is a majestic animal.  I believe everyone is or should be taken aback when they learn what a sexual deviate the duck has been found to be.